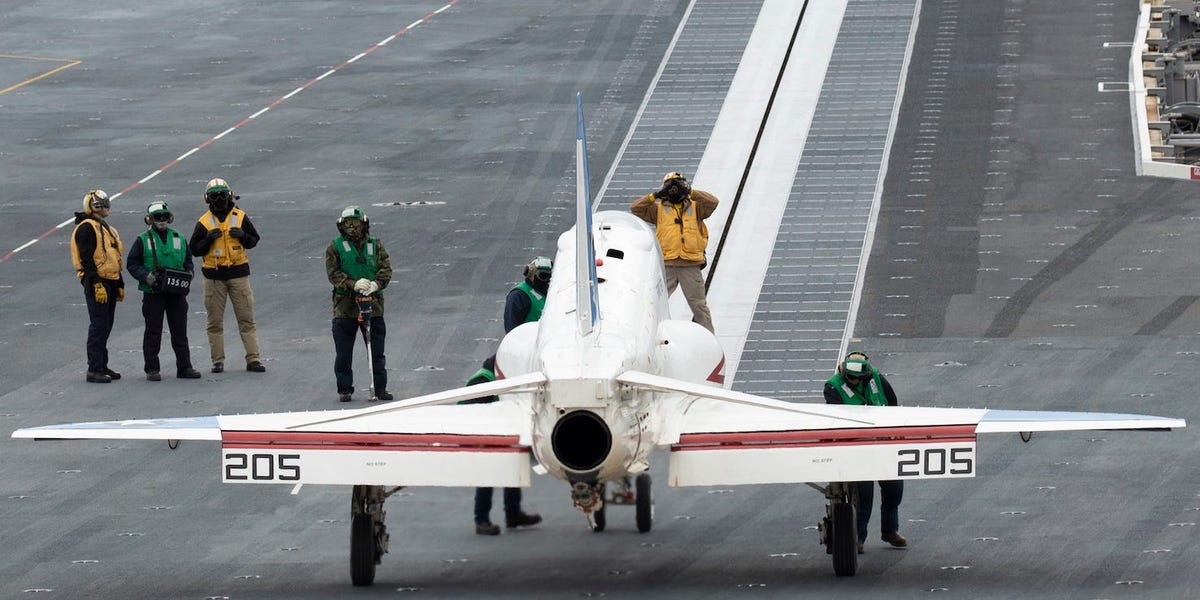 In September, US defense firm General Atomics announced that it had received a contract from the US Navy to continue its development and evaluation of its Electromagnetic Aircraft Launch System and Advanced Arresting Gear in preparation for their potential sale to France.

It is the latest development in France’s ambition to build a new nuclear-powered aircraft carrier, a project known as the Porte-Avions de Nouvelle Génération, sometimes called PANG, which translates to “New Generation Aircraft Carrier.”

The yet-to-be-named ship will replace France’s current carrier, Charles de Gaulle. PANG will be considerably larger than its predecessor and will grant the French navy the prestige of operating a “supercarrier” — a distinction held by only a few navies.

Launched in 1994 and commissioned in 2001, Charles de Gaulle replaced France’s two Clemenceau-class carriers, Clemenceau and Foch, which were decommissioned in 1997 and 2000, respectively. (Foch was sold to Brazil and was in Brazilian service until 2018).

It is the only non-US nuclear-powered aircraft carrier in the world. Its two K15 pressurized water reactors give it a top speed of about 27 knots and a range limited only by its crew’s endurance.

It is also the only non-US carrier to use catapults to launch aircraft, a system known as Catapult Assisted Take-Off But Arrested Recovery.

Its catapults are shorter versions of those used aboard US Navy Nimitz-class carriers. “An American officer is present among the crew of the aircraft carrier to ensure the maintenance interfaces,” Adm. Pierre Vandier, chief of staff of the French navy, said of Charles de Gaulle in July.

“For the future aircraft carrier it was also decided to go for American equipment, which will be electromagnetic catapults and electromagnetic arresting gear,” Vandier told Naval News, adding that there would be “similar cooperations” with the US “to support the ramp-up in operational power and to ensure the maintenance of these catapults.”

De Gaulle can sail with an air wing of up to 40 aircraft, though it is usually composed of 30 Rafale M fighters, two E-2C Hawkeye airborne early warning and control aircraft, and a combination of NH90, AS565 Panther, and AS365 Dauphin helicopters.

Charles de Gaulle’s first combat deployment was during Operation Enduring Freedom, during which its aircraft flew some 700 sorties against Taliban targets. In 2011, the carrier helped enforce a no-fly zone over Libya.

Charles de Gaulle has also been very active against ISIS, launching airstrikes against targets in Iraq from the Persian Gulf in 2015 and in support of the liberation Mosul while in the Mediterranean in 2016. This year, it helped reinforce NATO’s presence in the Eastern Mediterranean following Russia’s attack on Ukraine.

Though France has traditionally operated two carriers simultaneously, it never built a counterpart for Charles de Gaulle. There were plans for a carrier modeled on the British navy’s Queen Elizabeth class, but they were canceled in 2013.

The PANG will be a significant upgrade over Charles de Gaulle. It will be about 984 feet long and displace some 74,000 tons, putting it on par with the other active “supercarriers,” which usually displace over 65,000 tons.

Like its predecessor, the PANG will be nuclear-powered, using two K22 reactors, each capable of generating 220 megawatts. (The K15s each generate 150 megawatts.) French officials say the reactors will enable the navy to project power abroad while reducing emissions.

The PANG’s air wing will be larger than Charles de Gaulle’s and is expected to include at least 32 fighters as well as an undetermined number of support aircraft, helicopters, and drones.

In addition to the Rafale M, the air wing is expected to include the naval variant of the New Generation Fighter, a sixth-generation fighter jet being jointly developed by France, Germany, and Spain. Eventually the entire PANG air wing will be composed of NGFs.

The PANG will also feature EMALS and AAG — the same systems used by the US Navy’s Gerald R. Ford-class carriers. EMALS uses linear induction motors instead of steam, making it more efficient and able to launch fixed-wing aircraft more smoothly and at much faster rates.

EMALS has been a headache for the US Navy, but recent changes have increased the system’s reliability. The Navy said in July that EMALS and AAG aboard USS Gerald R. Ford had conducted 10,000 aircraft launches and recoveries.

Construction of the PANG is planned to start in 2025. Its first sea trials are expected to be in 2036, followed by commissioning in 2038 — the year Charles de Gaulle is expected to leave service.

Once commissioned, the PANG will replace Charles de Gaulle as the French navy’s flagship. It is expected to be in service until at least 2080.