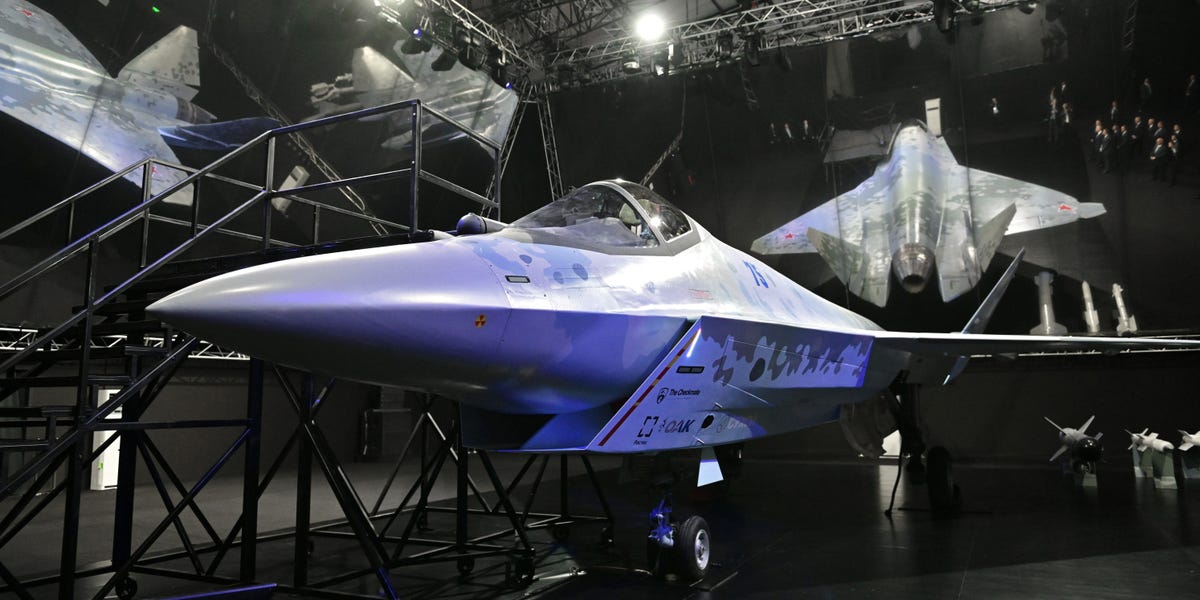 The Su-75 “Checkmate” is Russia’s attempt at an export fifth-generation fighter.

Billed as a cheaper F-35 with better specs than the JAS-39 Gripen, Russia designed the Su-75 specifically to sell to countries with no homegrown aeronautical industry.

Originally revealed at the MAKS Airshow last year, the Su-75 was hailed as a solid move by Russia’s United Aerospace Corporation, building off the Su-57 platform — Russia’s first fifth-generation fighter.

However, since its release, the fortunes of the Su-75 have fallen quite far.

The Sukhoi-designed Su-75 boasts many features to make it attractive to foreign buyers. Its single engine means fewer maintenance costs as well as less fuel consumption. Stealth characteristics such as an internal weapons bay, diverterless inlets, and a unique tail design are all a must have for fifth-generation fighters.

Additional fifth-generation aspects of the Su-75 are its ability to coordinate with drones, an emerging technology and doctrine which air forces hope to use to overcome enemy air defenses. These drones will be managed by an advanced AI onboard computer and avionics system which is capable of tracking and engaging up to six targets at once.

These upgrades represent a major step up from previous Russian exports such as the Su-30 and Mig-35. However, they are balanced by an affordable $25 million to $30 million price tag, one-quarter of the cost of an F-35 Joint Strike Fighter.

A Rostec spokesperson described the new fighter jet as a cutting-edge addition to the air-defense realm. They note that “The Checkmate fighter is outfitted with versatile armaments capable of fighting any threat: from unsheltered command posts to especially sensitive targets for a potential enemy.”

The jet was allegedly designed using a supercomputer and modern-day virtual modelling and digital calculations.

After the rollout of the Su-75, it appeared that Vietnam and India were to be the primary buyers with Argentina also potentially pursuing a deal.

Additionally, as early as January of this year, the United Arab Emirates seemed to be involved in a deal with the UAC to assist in the production and manufacture of the Su-75 following the suspension of a $23 billion arms deal with the US.

Russia’s ill-conceived invasion of Ukraine has put a major damper on their aerospace industry and hopes for the Su-75. International sanctions have crippled Russia’s ability to acquire and produce essential components of modern aircraft.

Most notably, precision machining equipment and semiconductors, without which the advanced avionics system is completely unable to function. This has ramifications for the production of an airworthy Su-75, now projected to fly in 2024 as well as future sales. If Russia struggles to guarantee parts and maintenance, it may turn off potential buyers.

Beyond questions of production, there is the rather large elephant in the room that is the performance of Russian jets in Ukraine. The loss of Su-30s, 34s, and even a 35 may make nations leery of purchasing aircraft untested by combat.

In addition to the challenges presented by the ongoing conflict in Ukraine and the sanctions which arose from a Russian Invasion, the UAC seems intent on making the development process as difficult as possible.

Apparently, designers are working on an unmanned version of the Su-75 in parallel with the manned variant. Given the inherent challenges in designing an unmanned combat aircraft (UCAV) — none have yet been used in combat and the only UCAVs currently flying are based on modifications to existing, proven airframes — it is difficult to see how Russia expects to develop the Su-75 into a UCAV when the manned version has yet to have a successful test flight.

Su-75 and the future

For now, it seems that the Su-75 program continues to limp along. Russian officials claim the jet will have its first flight in 2024 however it remains to be seen whether they will meet this deadline under the stringent sanctions and with the ongoing war in Ukraine.

Furthermore, it appears that the United Arab Emirates has at least paused its involvement in the project, drying up a critical source of funding and R&D.

While Vietnam and India may still be interested, it is unclear whether Russia will find a market for the Su-75 if it does enter production. As Harrison Kass of 19FortyFive says “…countries within the Russian sphere of influence are still going to buy Russian equipment, regardless of whether the international community is upset with Putin.”

It remains to be seen, however, whether other concerns trump traditional considerations when it comes to arms purchases. Additionally, if the production estimates of the Su-75 continue to be delayed, foreign clients may look elsewhere to fulfill their fighter needs.

Maya Carlin is a Middle East Defense editor with 19FortyFive. She is also an analyst with the Center for Security Policy and a former Anna Sobol Levy Fellow at IDC Herzliya in Israel. She has bylines in many publications, including The National Interest, Jerusalem Post, and Times of Israel.