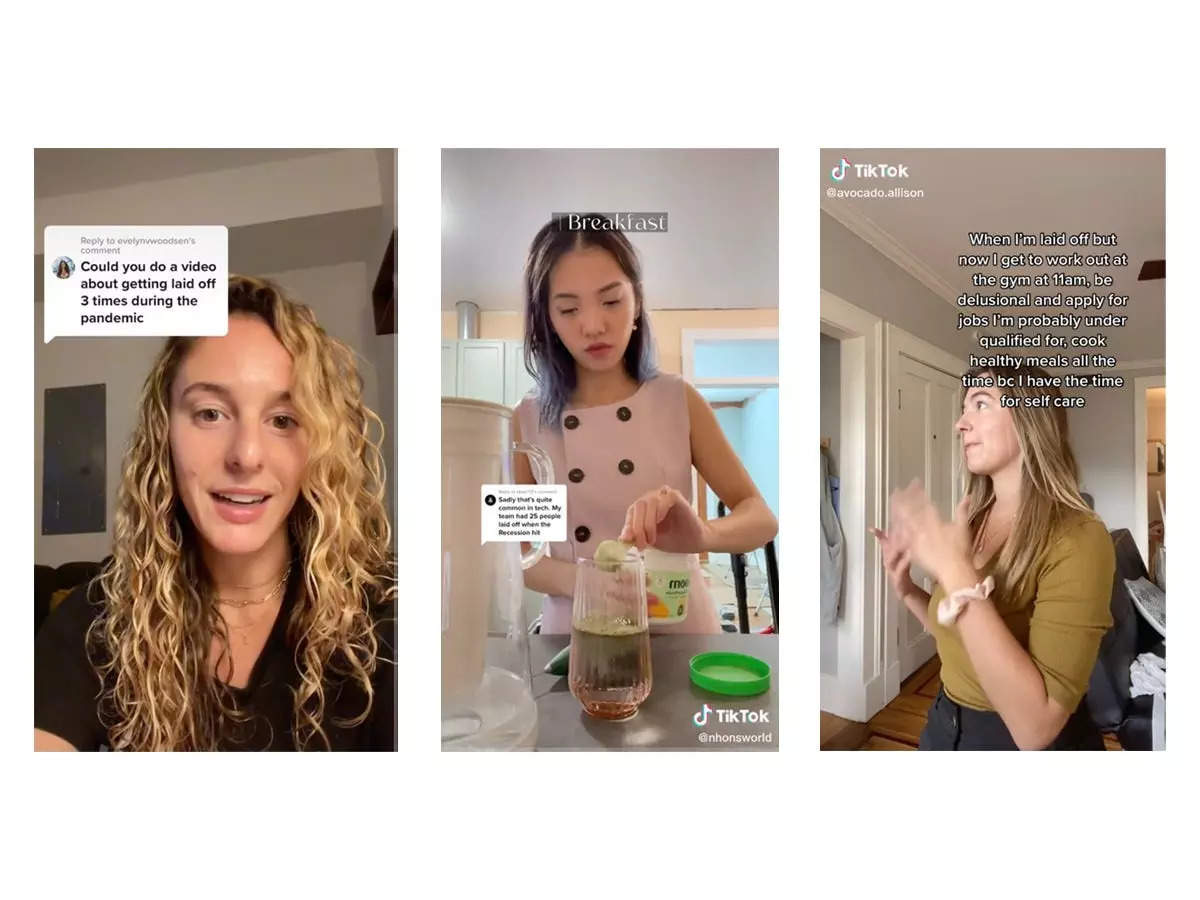 TikTokers are smashing the stigma of getting laid off as a recession looms and more people fear for their jobs: ‘Posting it on TikTok was the best thing I could have done’

Open up TikTok and you’re likely to come across a stranger taking you through a day in their life. The videos usually tell the viewer what they’re in for: A voice-over says, “Get ready with me to …,” followed by whatever that person has planned for the day.

Some are headed to museums, others to their office or daily commute. And then there are the ones sitting in front of laptops crying or staring numbly ahead: They just got laid off.

Allison Baird, 26, got laid off from her job as a marketing project manager in September, after seven months on the job.

“I had suspicions a layoff would happen, but the CMO seemed very positive about building a marketing team at the company, so I didn’t let my thoughts wander for long,” Baird told Insider. “I always had a gut feeling something was off, though.”

It felt “strange and surreal” to get the ax, she said, but Baird made the most of it. She took to TikTok to celebrate the fact that she can now work out during the day and take time for self-care and cooking healthy meals.

People documenting their layoffs, which is popular on TikTok with the hashtag “layoffs” racking up more than 30 million views, may seem like a stark contrast to the feelings of shame and devastation that often accompany job loss. Research shows that after a layoff, people are less willing to trust others, especially if they were very engaged with their jobs.

But America’s great rethink of work — and people reconsidering how much their careers should factor into their lives — now extends to losing a job. Workers are recontextualizing and humanizing their layoffs, sending the message that the blame lies with the firm that let them go — not a reflection of their personal merits.

“We see people expecting more from organizations than they traditionally have expected,” Rebecca Kehoe, an associate professor of human resource studies in the ILR School at Cornell University, told Insider. “It’s a parallel trend, but it informs what we’re seeing in this current layoff context, where workers are having higher expectations of organizations as employers.”

During the pandemic, some workers felt they were expendable and easy to lay off, which encouraged them to stand together to demand more. One result is that layoffs are now for the world to see — and a rallying cry for workers to come together to support job losers. While layoffs are still near record lows, the trend of posting your job loss could keep rising as the economy goes further into a downturn and starts shedding even more jobs.

Jessica Gelbwaks, 27, is a professional copywriter, and has had three jobs throughout the pandemic. As she described on TikTok, she’s been laid off from a healthcare agency, an ad agency, and a tech startup in the past two years.

“Getting laid off so many times has made me hesitant about taking another full-time job in the near future,” she told Insider. “It’s so hard to know how the company will do or if cuts need to be made. I’ve started freelancing and I’ve found it to be a way more stable situation, ironically enough.”

Madison Boukas, 28, was a sales agent specializing in Medicare and supplemental insurance before she got laid off. Currently, she works as a digital-account coordinator. After losing her job, Boukas struggled financially, enrolling in Medicaid and receiving food stamps after a months-long process. Posting on TikTok rallied people online to help her — they reached out to send clothes for her son, as well as money over Venmo for her to buy groceries.

“Posting it on TikTok was the best thing I could have done, it got me real support emotionally,” she told Insider. “It also started a huge debate about employment in the US — if you look through the comments, you’ll see people criticizing me for expecting job stability when I’m not a ‘skilled worker,’ despite being licensed to sell health and life insurance in 43 states. It really showed me a range of people’s opinions on employment and the social safety net, or lack thereof, in the US.”

Kehoe says experiences like Boukas’ are a part of a larger trend online.

“With the increase of this sharing on social media, there’s been this greater camaraderie among strangers as people have shared their experiences,” Kehoe said. “This sharing has often been met with other users reaching out to offer comfort and support, in some cases even sharing information about job opportunities, which just kind of increases the propensity of others who are going through these experiences to share and to be more open about them.”

Workers like Boukas and Gelbawks are nervous about what a recession might mean for their job prospects — and how long they’ll be able to hold onto a job once they get it.

And that’s not an unfounded fear. Layoffs in tech, which are currently abundant, are a classic harbinger of a recession. And economists are predicting even more layoffs over the next two years in order to fight inflation.

The fundamental shift in how Americans view work and what employers owe them means that individual stories of layoffs will probably stick around.

As the amount of sharing increases, “people want to hold organizations to a higher standard of accountability,” Kehoe said. Laying off workers already hurts a firm’s reputation. Now, a new work mentality means greater scrutiny around business decisions that organizations are making, rather than individuals just seeing themselves as victims of those choices.

“To the extent that organizations are violating expectations around the way that they’re treating a variety of stakeholders — in this case, employees — employees’ grievances around this are going to be aired,” Kehoe said. Social media gives laid-off workers a platform “to make it much more public than we’ve ever been able to see.”

It might be an outgrowth of how Americans are treating their jobs. As workers gained a little more power after a disruptive period of employment, when most people’s jobs changed in some ways, their expectations changed. For some, that was higher wages, better benefits, or a desire to bargain collectively. And as businesses reiterated just how much they need workers, those workers expectations’ changed, too. They expect firms “to not treat employees like expendable resources when financial pressures arise,” according to Kehoe.

Nhon N., a 24-year-old recruiter who documented life after her layoff, told Insider that she’s still a “struggling workaholic” who puts “too much heart” into her work.

“I always hear the phrase along the lines of ‘your company can fire you at any time so remember that you don’t owe your company anything’ on social media to encourage people to build a healthier relationship with work,” she said. “This is my first time being laid off and a stark reminder of that notion. I hope I keep this in mind better with future jobs and remember to prioritize my needs better.”