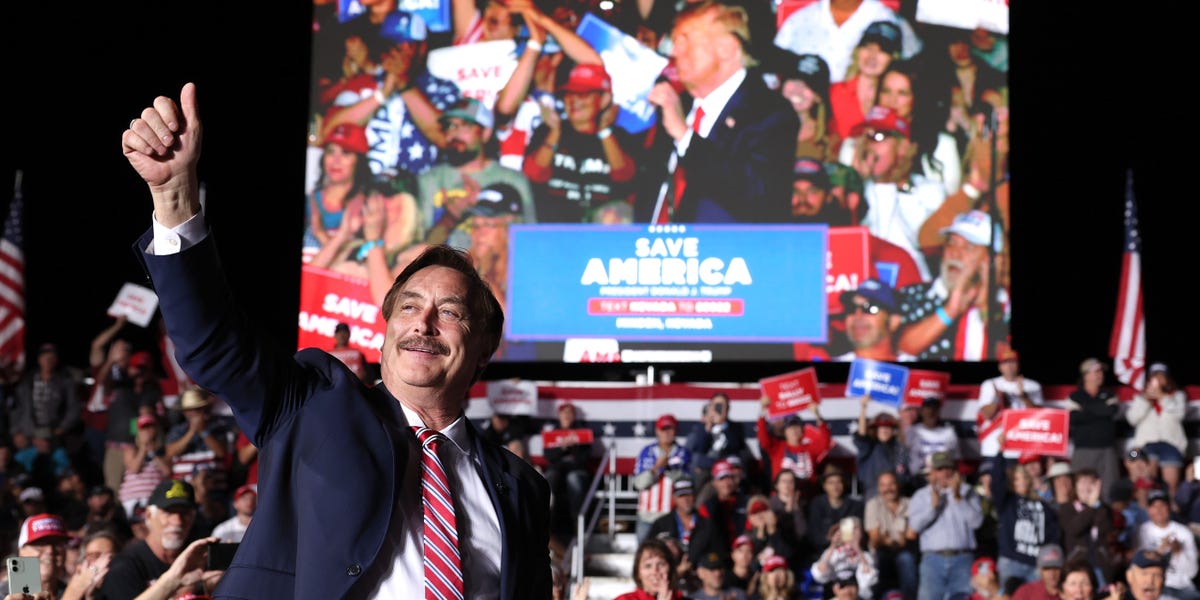 Trump ally Mike Lindell is predicting a surge in Republican votes at the midterms, saying liberals in California have expressed interest in his baseless voter fraud claims

MyPillow CEO Mike Lindell, a staunch ally of former President Donald Trump, believes there’ll be a strong GOP turnout at the upcoming midterms, citing the interest “liberals and progressives” in California have shown in his voter fraud crusade.

During a rally in Arizona on Sunday, Lindell told RSBN that he had recently spent some time in Northern California — a Democratic stronghold — where he was repeatedly approached by people interested in his views on voting machines.

“And I was up there for five days with all these liberals, progressives. And all of them I talked to — I would walk around the streets. You know me, I just go down,” Lindell said. “They all come up to me, wanted pictures. But they wanted to know, is your stuff, is this stuff real with the voting machines and stuff?”

“And they see the problems with the gas and everything,” he added, referring to high gas prices while predicting what he thought would be the most significant Republican turnout in history. “I think they’re either going to vote for a Republican, or they’re not going to vote at all.”

Lindell told Insider on Sunday night that his California trip took place last week and that “at least 30 people” had approached him during the four days he was there.

“They were all friendly and wanted pictures,” Lindell said, adding that these people often “wanted talk about how bad the economy is.”

The last time California went to the GOP was in 1988. The state has also recorded a relatively stable voter turnout across the last several elections.

Meanwhile, Lindell is facing a $1.3 billion lawsuit from voting systems company Dominion, which sued him and his home goods company in February last year. The suit alleges that Lindell defamed Dominion by spreading false conspiracy theories about the company’s role in the 2020 election.

Last week, the Supreme Court refused to intervene in the lawsuit, leaving in place a lower court ruling allowing the case to move forward.

Lindell told Insider in December that he had exhausted half of his estimated $50 million fortune trumpeting Trump’s baseless election fraud theories, including $10 million spent on creating his social media hub Frank Speech after getting banned from Twitter for spreading disinformation.

On September 13, Lindell’s phone was also confiscated by FBI agents investigating his involvement in attempts to discredit the 2020 election. A week later, Lindell sued the FBI, accusing the agency of violating his “First, Fourth, Fifth, and Sixth Amendment” rights by seizing his phone.