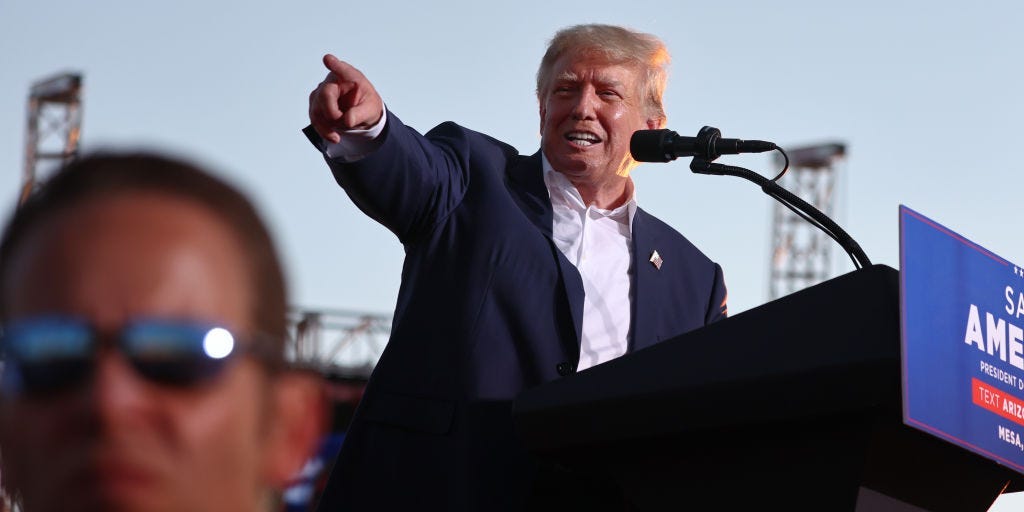 Trump gave conflicting defenses about the Mar-a-Lago raid, claiming both that all the documents are ‘mine,’ and that some were planted

Former President Donald Trump addressed the FBI’s raid on his Mar-a-Lago resort at a Sunday rally in Arizona, making a series of misleading claims as he sought to portray the investigation as part of a plot against him.

Trump baselessly claimed that other presidents, including Bill Clinton and George H.W. Bush, had mishandled classified information yet faced no legal consequences.

“I had a small number of boxes in storage. There is no crime. They should give me immediately back everything they have taken from me because it’s mine,” Trump said.

He went on to accuse the FBI of planting evidence, and alluded to reports that documents containing nuclear secrets had been seized in the raid.

“They plant documents. Let’s see, is there a book on nuclear destruction or building of a nuclear weapon, let’s put that book in with Trump,” the former president told supporters, appearing to paraphrase those plotting against him.

The Department of Justice has in court filings alleged that Trump wrongly took government records, including highly classified information, storing them in unsecured locations at Mar-a-Lago after he left office.

Trump was repeating defenses at the rally he’s made for weeks, but which his lawyers have notably not made in court appearances linked to the case.

Some of Trump’s claims are aimed at riling up his core supporters ahead of a widely anticipated announcement of a 2024 presidential, analysts have said.

Scores of government records were recovered in the Mar-a-Lago raid, and Trump at the rally gave offered no argument for why they should be returned.

His lawyers have argued that some of the documents are private and should be returned under privilege rules, but DOJ officials who sorted through them have found only a small number fell into those categories.

Trump’s lawyers have offered no evidence to back his claim that evidence was planted in the raid.

All observed the usual process for obtaining government records after leaving office for display in their presidential libraries, applying for permission to borrow them from the National Archives having handed them over to the government on leaving office.

Both have embraced his baseless claims the 2020 election was stolen from him by fraud, and will have key election-administration roles if they win.