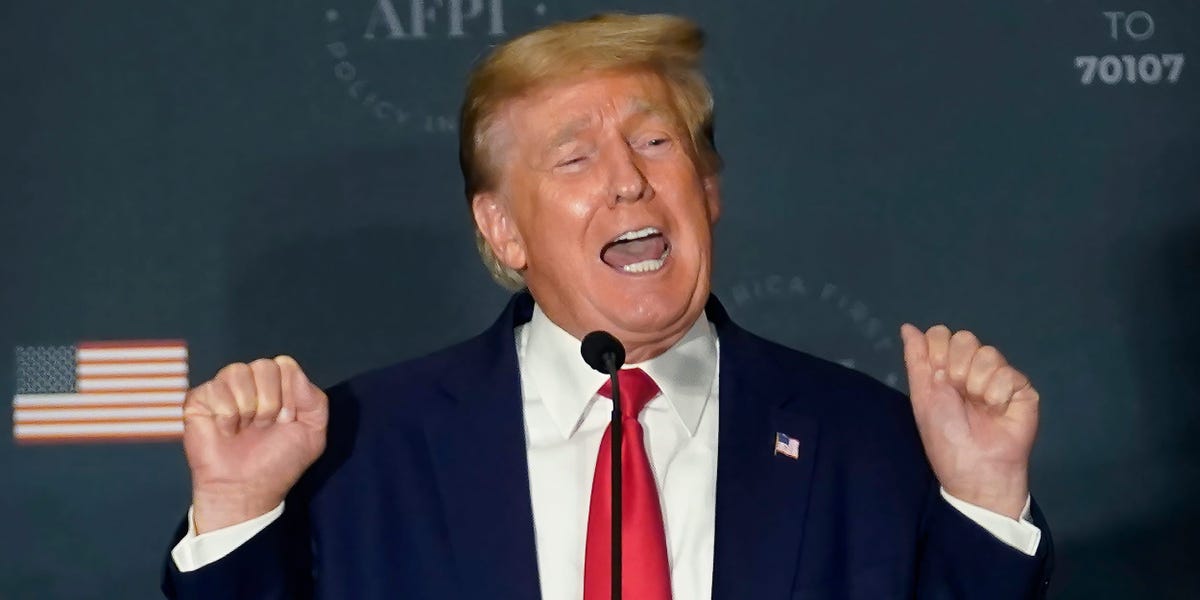 Trump said he almost didn’t want to refute Cassidy Hutchinson’s testimony that he lunged at a Secret Service agent on Jan. 6 because it made him look tough


MIAMI, Florida — Former President Donald Trump said Wednesday that he almost didn’t want to refute a secondhand account that he tried to lunge at a Secret Service agent on January 6, because it made him look “physically tough.”

Trump was referring to former White House aide Cassidy Hutchinson’s testimony before the January 6 Committee, in which she relayed that she heard secondhand that the former president tried to grab the steering wheel of his SUV and lunged at one of his Secret Service agents on January 6, demanding they take him to the Capitol where his supporters were headed.

Trump didn’t mention Hutchinson by name but in a speech before the Hispanic Leadership Conference, organized by America First Works, he referred to “this one very sick individual” and recounted the details of her testimony.

“If you listen to this one very sick individual, in order to get the Secret Service to take me to the Capitol, I grabbed one around the neck,” he said to laughs in the audience in a ballroom at the InterContinental Miami. “I almost didn’t want to dispute it, because a lot of people said, ‘I never knew you were that physically tough.'”

“If I had grabbed him around the neck, I would have been in very serious trouble,” Trump added, calling the story “phony.”

Hutchinson became a star witness to the January 6 Committee investigating the attack on the Capitol that attempted to decertify the 2020 election. During her testimony, she relayed Trump’s efforts to go to the Capitol on January 6 after the rally at the Ellipse, though his aides and lawyers shot down the idea.

Hutchinson said Tony Ornato, the White House deputy chief of staff, recounted the lunging incident to her immediately after it occurred.

She testified that Trump “said something to the effect of, ‘I’m the effing president, take me up to the Capitol now,’ to which Bobby responded, ‘Sir, we have to go back to the West Wing.'” Hutchinson was referring to Bobby Engel, head of Trump’s protective detail.

“The president reached up towards the front of the vehicle to grab at the steering wheel. Mr. Engel grabbed his arm, said, ‘Sir, you need to take your hand off the steering wheel, we’re going back to the West Wing, we’re not going to the Capitol.’ Mr. Trump then used his free hand to lunge towards Bobby Engel,” Hutchinson said, adding that when Ornato “recounted the story to me, he had motioned towards his clavicles.”

The account was anonymously scrutinized by sources who spoke to NBC News, but Secret Service agents haven’t testified about that day under oath and before the committee — even though a Trump ally says they’ve offered to do so.

A former Secret Service agent was skeptical of the account in an interview with Insider, saying Trump would have had to squeeze through an “extremely tight” space to be able to grab the steering wheel of an SUV and lunge at a Secret Service agent. Trump’s “girth,” the former agent said, would have made the feat difficult.