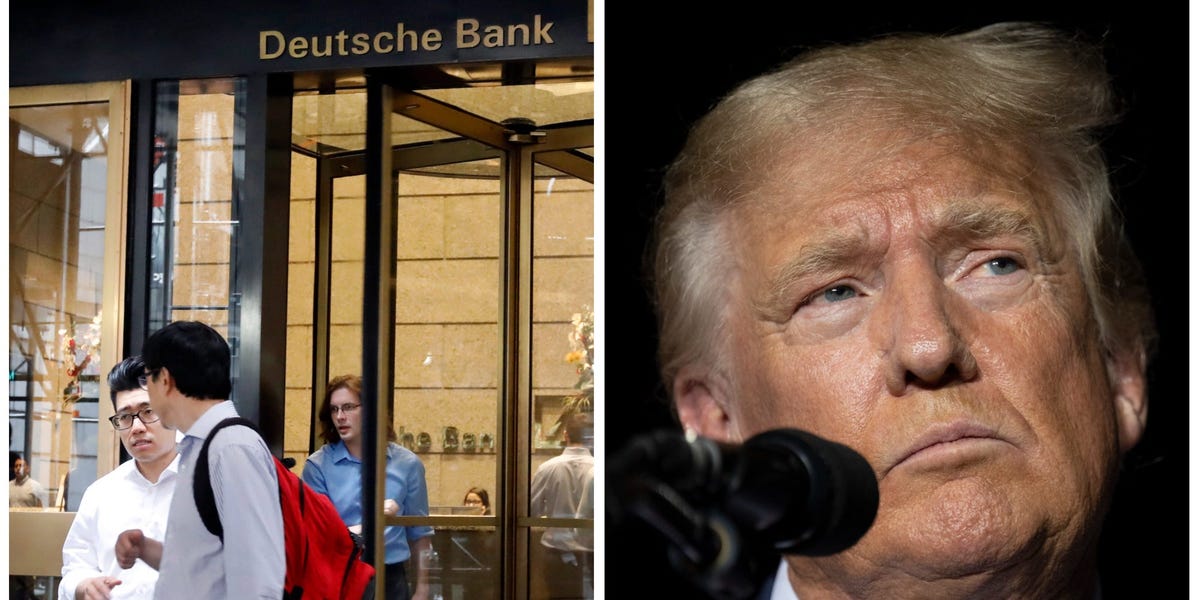 For the past 10 years, Deutsche Bank has been Donald Trump’s banking bestie, loaning him more than $400 million as he developed a Miami golf resort, a tower in Chicago, and a luxury hotel in the heart of Washington, DC.

But the two are now in the midst of an ugly, shotgun divorce, according to revelations in a new court filing by New York’s attorney general, Letitia James — with Deutsche Bank holding the shotgun.

Since Trump left office last year, the Frankfurt-based international bank — which has lent Trump far more than any other financial institution — has been steadily enforcing a “managed exit,” as James’ filing calls it, from a lucrative relationship with the former president stretching back to the 1990s.

On the surface, the slow-motion split, which began 21 months ago, appears to be a breezy affair, with Trump easily zeroing out all but $45 million in Deutsche Bank debt in May.

“By the way, I paid them back,” Trump would brag on Fox News the night after James filed her massive, September lawsuit, accusing the former president of inflating his net worth in financial documents by billions of dollars.

“The banks made a lot of money,” Trump told host Sean Hannity. “She’s trying to defend banks that got paid off.”

But as with many protracted divorces, the split between Trump and his once-favorite bank began with acrimony, in a behind-the-scenes crossfire of accusations, ultimatums, and shade-throwing.

At one point, as an apparently distracted Trump struggled to remain in office, his lawyers ghosted the bank for six months, ignoring escalating demands for answers.

James’ new court papers — including a newly-unsealed email chain between the two sides —offer a glimpse into the tense back-and-forth behind the breakup.

In fact, the bank routinely factored in these anticipated exaggerations, applying what the AG called a Trump “haircut” or percentage reduction, to whatever the former president swore on paper he was worth.

But what the attorney general began alleging, in publicly-filed court papers two summers ago, were exaggerations that no Trump haircut could make pretty.

James was alleging Trump committed “potential fraud” in the very documents the bank used each year to decide how much to lend, what interest to set, and whether the loans remain in good standing.

The attorney general “is currently investigating whether the Trump Organization and Donald J. Trump improperly inflated the value of Mr. Trump’s assets on annual financial statements in order to secure loans and obtain economic and tax benefits,” James revealed in an August, 2020, court filing.

Two months would pass — and the 2020 presidential campaign would reach its final frenzy — before Deutsche Bank, already cooperating with the AG’s subpoenas, began asking questions.

The bank broached its concerns in an October 29, 2020, letter to Donald Trump Jr., who despite his admitted ignorance of accounting principles had been signing off on much of his father’s allegedly fuzzy math since 2017.

What on earth, Deutsche Bank wanted to know, was going on with this probe by James, the New York attorney general, according to a letter unsealed by the AG on Thursday.

Was it true, they asked Trump’s namesake son, that these annual, 20-odd-page, self-certified accountings of his father’s personal net worth — so crucial to Deutsche Bank’s decision-making — were frauds?

Deutsche Bank’s letter, sent five days before the election, sat around unanswered by anyone at the Trump Organization for more than a month, the back-and-forth released by James shows.

Trump himself was deep in the swamp of election denial by December 7, 2020, when his side finally responded. And instead of Donald Trump, Jr., it was the Trump Organization’s top lawyer, Alan Garten, who sent Deutsche Bank a less-than-thorough reply.

The October 29 letter “only recently came to our attention … we had not seen it before,” Garten explained.

“Our company greatly values its relationship with Deutsche Bank, and certainly wishes to cooperate with DB whenever possible,” the top Trump Org lawyer added.

“That said, we are unaware of anything that would require us to respond to an inquiry of this nature. If you are aware of any authority to the contrary, please let us know,” he ended the letter, signing off with a cordial, “we wish you a Happy Holiday season.”

In other words, happy holidays, but don’t expect any presents from us.

It’s unknown if Trump himself was told of Deutsche Bank’s concerns at this point. He certainly was otherwise occupied, firing off 16 election denial tweets on that same December day, according to the American Presidency Project, including one from 1:40 in the morning reading, “NO WAY WE LOST THIS ELECTION!”

A week later, the exchange escalated. Deutsche Bank answered the Trump lawyer’s email with one from a lawyer of its own.

It was now lawyer versus lawyer.

“As you know, Donald J. Trump is required under the terms of his loan guarantees to provide annual financial statements to Deutsche Bank and to ensure that those statements ‘are true and correct in all material respects,'” the bank’s attorney, Gregory Candela, wrote, quoting from the guaranty agreement for the $170 million Old Post Office loan.

Candela repeated Deutsche Bank’s request for “further information” on the AG’s fraud allegations. Then he upped the ante, saying the bank needs that information in order to decide “whether an event of default may have occurred.”

“We appreciate your prompt response to these matters,” the bank’s lawyer urged.

“Thanks Greg,” Trump’s lawyer responded in an email two days later. It was December 16, 2020, a day when Trump tweeted 17 times about what he termed the “Fraudulent 2020 Election.”

“We are reviewing your email and hope to have a response in the next few days,” Trump’s lawyer said.

So where’s that response, Deutsche Bank’s lawyer asked Trump’s lawyer in an email sent on January 8, 2021, three weeks and one Capitol siege later.

“Alan,” he wrote, in what would be the end of the exchange.

“I’m following up on the emails below. Will you please let me know when we can expect a response? Thank you.”

Among a still-distracted Trump’s tweets that day was one from 3:44 p.m. that read, “To all of those who have asked, I will not be going to the Inauguration on January 20th.”

As for Deutsche Bank’s final request for a response, “ultimately, none was forthcoming,” the AG’s filing from Thursday said.

“As a result of the Trump Organization’s failure to respond, Deutsche Bank decided to exit its relationship with the company.”

The formal decision was made by three bank executives during a Skype call on the afternoon of May 27, 2021, another of James’ filings reveals.

It would take a year, until May, for Trump to retire most of his debt, as demanded.

Flush with cash from the $375 million sale of his DC hotel, formerly the Old Post Office on Pennsylvania Avenue, Trump paid off that property’s $170 million loan in full. He refinanced the $125 million borrowed for his 2011 purchase of Trump National Doral, his Miami golf course, as Forbes’ Dan Alexander first reported in July.

But Deutsche Bank’s final vote to pull the plug on its four-decade relationship with Trump took no time at all.

The Skype call was over in 11 minutes and 8 seconds.

Trump has repeatedly insisted that his business has committed no fraud and that the attorney general is engaging in a political “witch hunt;” a Trump lawyer did not return a request for comment.

A Deutsche Bank spokesman told Insider he could not comment on legal claims or on client accounts.

“The Bank takes its legal obligations seriously,” the spokesperson said, “including appropriately responding to authorized investigations and proceedings.”