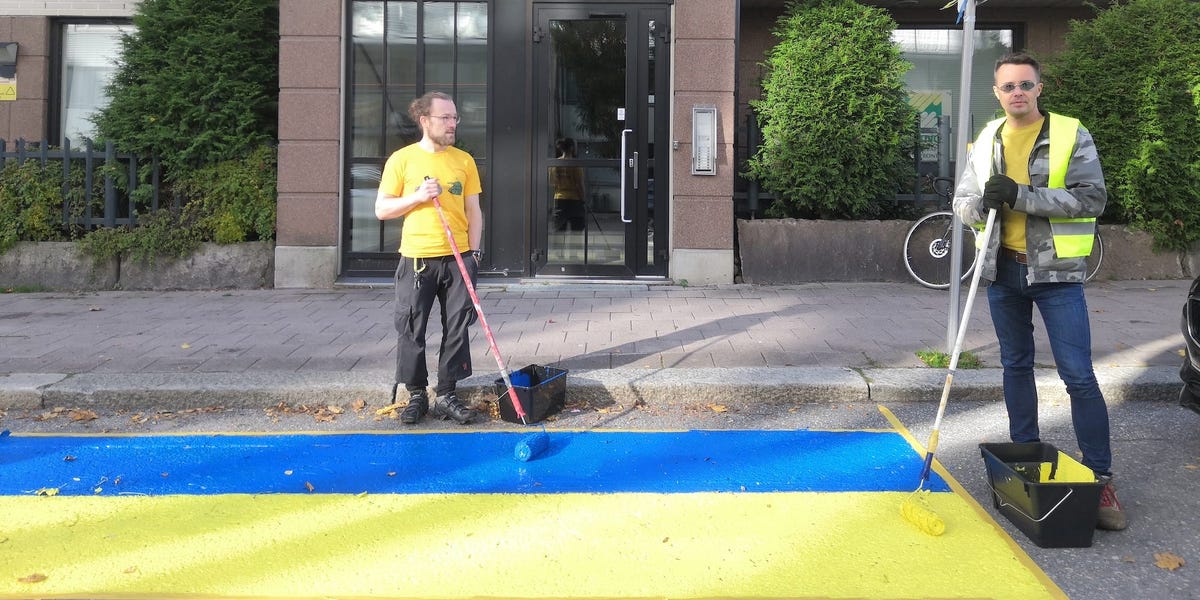 Two men in a Finnish city “annexed” a Russian diplomat’s parking spot for Ukraine by painting it over with the country’s flag on Wednesday.

Acting on what they called a “two-man referendum,” Jarno Virtala and Markus Mattsson decided to paint over the spot, in the city of Turku, with a broad blue and yellow stripe.

The move was a swipe at the votes Russia called in occupied parts of Ukraine to justify its claim that they are now Russian territory. The votes were dismissed as a shame by Ukraine and its allies.

The spot sits outside of the official residence of the Russian diplomat Pyotr Plihin, and is specially reserved by the city for diplomatic use, according to national broadcaster Yle.

On Thursday, city officials announced they would not be removing the paint, Yle reported.

The idea first came from Virtala, who told Insider he showed up in a hi-vis jacket to appear more like a maintenance worker. But after about half an hour, Mattson, who was cycling to work, stopped and decided to help him.

Mattson, whose partner is Ukrainian, wrote on social media: “We held a two-man referendum on annexing the parking spot to Ukraine.”

“One hundred percent of the voters agreed and no disagreeing proposals were expressed, so we decided to celebrate the results by painting a flag of Ukraine on the spot, he added.”

Both Mattson and Virtala, who didn’t know each other before that day, told Insider they were looking for a peaceful way to express their support for Ukraine and their opposition to the referendums.

President Vladimir Putin has used them to justify a claimed annexation, an action that was overwhelmingly condemned by the UN’s General Assembly on Wednesday.

Virtala, a self-employed property manager, told Insider that after the paint dried, the diplomat’s car returned.

“And then the consul came out from the building and started to take photos of me and he wasn’t very happy,” Virtala said. “I think he didn’t like the colors at all.”

According to Yle, Plihin was already getting the cold shoulder from some of his neighbors.

Ari Sinkkonen, who runs a nearby bike shop, told the outlet he had hung a Ukrainian flag where it would be visible to the consul from his house.

“We don’t say hello one way or the other,” Sinkonnen told the outlet. “He doesn’t greet anyone, and no one greets him.”

Meanwhile local Mayor Minna Arve tweeted that Finland should work to close the consulate, one of three in the country. The consulate did not respond to Insider’s request for comment.

Finland shares a large land border with Russia, and had maintained an uneasy neutrality for decades between Russia and NATO. But after Putin invaded Ukraine, Finland applied to join NATO, andis undergoing the accession process.

It’s not the first trolling of a Russian diplomatic outpost since the war began. On Tuesday, a German court ruled that a wrecked Russian tank could be placed outside the country’s Berlin embassy, as Insider reported.

Other Russian diplomats around the world have been confronted with Ukrainian symbols, or found the streets housing their embassies renamed to honor Ukraine.

Virtala and Mattson emphasized that they don’t want to encourage more aggressive forms of protest or to disturb anyone living nearby. Both said they hoped to inspire people to support Ukrainian causes.

“If Ukrainians ask me to, I’d be happy to do my part in washing off the colors,” Mattson told Insider.

But they said they’ve had a flood of messages, largely positive — and last time Mattson cycled past, an elderly couple were laughing and taking pictures, he said.

“The goal was that these Russian officials and other Russian people would very clearly know that we strongly do not accept what this Russia is doing there in Ukraine,” said Virtala. “Because now it can be seen from the window of his home.”