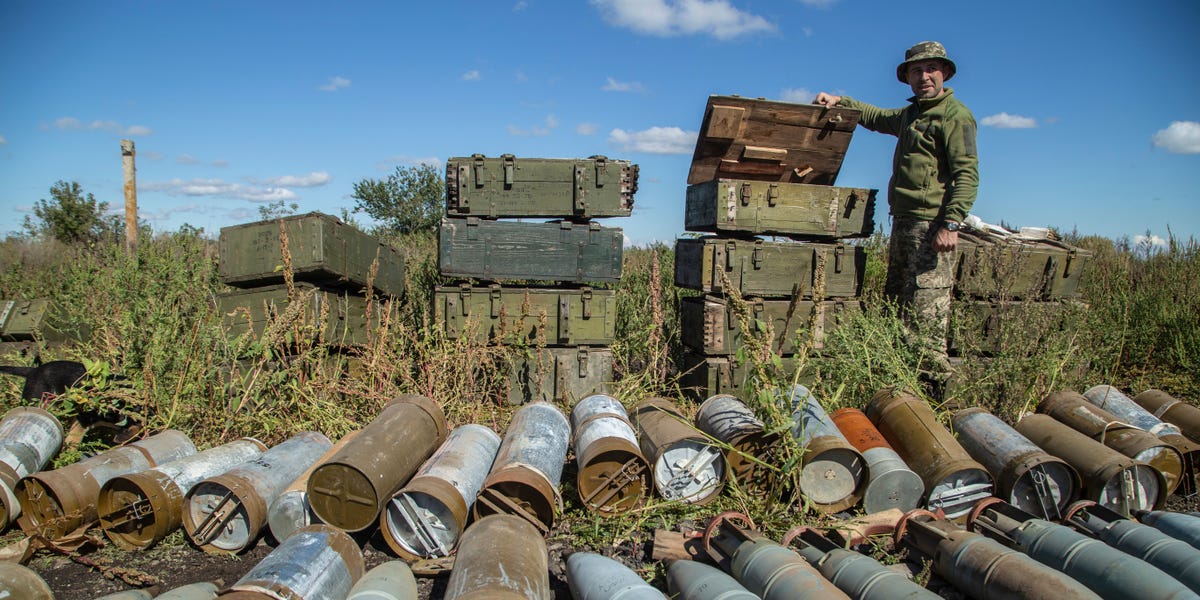 Ukraine is no longer low on artillery ammo because Russia abandoned so much in recent retreats, report says


Ammunition left behind by fleeing Russian troops is filling Ukraine’s depleted reserves and powering its counter-offensive, according to The Wall Street Journal.

Russia’s hurried retreat from Kharkiv in early September saw soldiers abandoning a mass of hardware, including tanks, other armored vehicles and howitzers.

They also left behind huge quantities of Soviet-caliber artillery shells, the paper reported.

“The Russians no longer have a firepower advantage,” one unnamed artillery officer told the paper.

“We smashed up all their artillery units before launching the offensive, and then we started to move ahead so fast that they didn’t even have time to fuel up and load their tanks. They just fled and left everything behind.”

That equipment is being turned on Russian forces as Ukraine advances beyond the recently recaptured city of Lyman in the Donbas region, the WSJ reported.

The recapture of Lyman provides strategic advantages as city served as a supply and logistics hub for Russia’s operation in the region.

Prior to these reversals in Kharkiv and Donetsk this fall, Ukraine struggled to match Russia in sheer quantity of firepower.

Much of Ukraine’s military arsenal is Russian or Soviet equipment, making it hard for them to replenish stocks.

In March, western officials reported that Ukrainian troops in Mariupol were resupplying by stealing ammo from Russian soldiers.

By June, Vitaly Kim, the governor of the southern region of Mykolaiv, said “we are out of ammo,”  Voice of America reported.

The US depleted its own reserves of some ammunition in supplying Ukraine, with levels of 155 mm ammunition becoming “uncomfortably low,” as one unnamed defense official told the WSJ in late August.

But this has begun to change since Ukraine’s lightning-fast counter-offensive in September. As its soldiers recaptured huge swathes of territory in the northeastern Kharkiv region, Russians dropped their guns and abandoned tanks.

One Ukrainian soldier, identified only as “Birdie,” told the Telegraph that during that effort: “They left a huge amount of vehicles and ammunition. We couldn’t transfer or evacuate it all to our rear.”

The Twitter account of the Ukrainian Ministry of Defense mocked the Russians as “the largest supplier of equipment for the Ukrainian army” — a jibe that is, according to one reckoning, true.

Oryx, a project that documents and tracks military equipment usage and losses, counts 442 Russian tanks as captured by Ukrainians throughout the entire war. Three hundred and twenty tanks have been supplied to Ukraine from elsewhere, the WSJ reported.