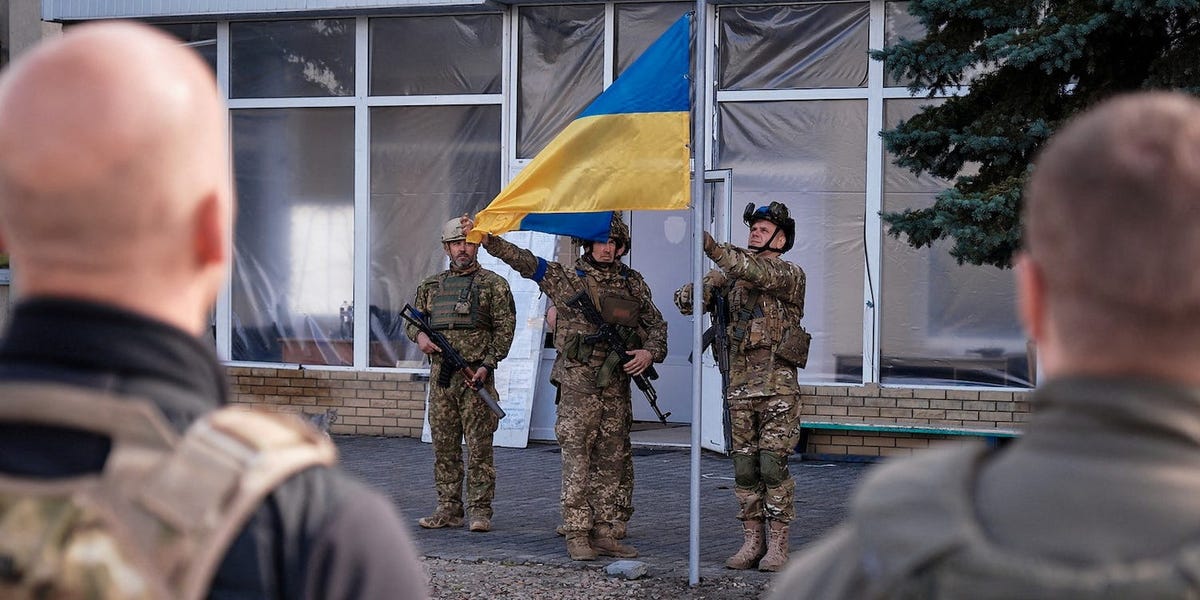 
Ukraine’s counter-offensive is hampering Russia attempts to claim control in regions that President Vladimir Putin has claimed to have annexed.

Ukrainian forces are continuing the drive to recapture northeastern territory that led to September’s stunning reversals in Kharkiv — and now well beyond.

As of October 2, the Ukrainian army also began pushing south into the Kherson region, according to the UK’s Ministry of Defence.

“While the ‘Russian parliament’ is intoxicated from the futile attempts at annexation, our soldiers continue moving forward,” Reznikov wrote.

Much of the territorial gains he reported have been confirmed independently.

To the east of the country, as of Wednesday Ukraine had likely recaptured Hrekivka and Makiivka in Luhansk, as well as claiming to have liberated a number of villages in the region, per an assessment by the Institute for the Study of War think tank.

And to the south, Ukraine as of Tuesday had retaken a cluster of settlements in the Kherson region, generally sitting around 75 miles from the city itself, the ISW said.

Russia is losing land it claims

The intense fighting is taking place in the four regions — Donetsk, Luhansk, Zaporizhzhia and Kherson — that Putin claimed after holding illegal referendums.

Russia’s claim of annexation is based its claim that the Ukrainians living there have expressed their will to become part of Russia through the vote.

But those votes — held under military occupation — have been decried as illegal by the UN and have not been recognized by the West or much of the wider international community.

And Russia does not currently occupy 100% of any of those regions.

And just as Putin announced the annexation to crowds in Moscow’s Red Square on Friday, Ukrainian troops were busy chasing their Russian counterparts out of one of the supposedly newly Russian cities — the strategic hub of Lyman, at the western edge of the Donetsk region.

It’s a stark — and for Putin, embarrassing — example of how the daily-changing reality on the ground differs strongly from Moscow’s claims.

Despite having claimed the four regions as Russian, the Kremlin has declined to clarify exactly where “Russia” begins and ends in those regions.

During a Wednesday conference call, Kremlin spokesperson Dmitry Peskov would not specify the exact borders of the areas claimed to have been annexed, Reuters reported.

A Russian map seen by Reuters claims the full territory of all four regions as “new regions” of Russia, but marks some of them as being under Ukrainian control.

Asked about the apparent contradiction between Putin’s decree and military reality, Peskov said: “There is no contradiction whatsoever. They will be with Russia forever and they will be returned,” according to the outlet.

Putin said in his speech that the citizens of those regions “will become Russian citizens forever.”

And yet Russia has attacked those regions since — something that, by his own logic, would be an attack on Russians.

Russian destroyed an apartment building in the city of Zaporizhzhia on Wednesday night, killing at least three people and injuring a further 12 , as Reuters reported.

Although Russia claims to have annexed Zaporizhzhia region, it does not control the city itself, where the missile struck.

Nonetheless, by the false logic of Putin’s annexation decree, it appears that the attack would have hit newly “Russian” people.