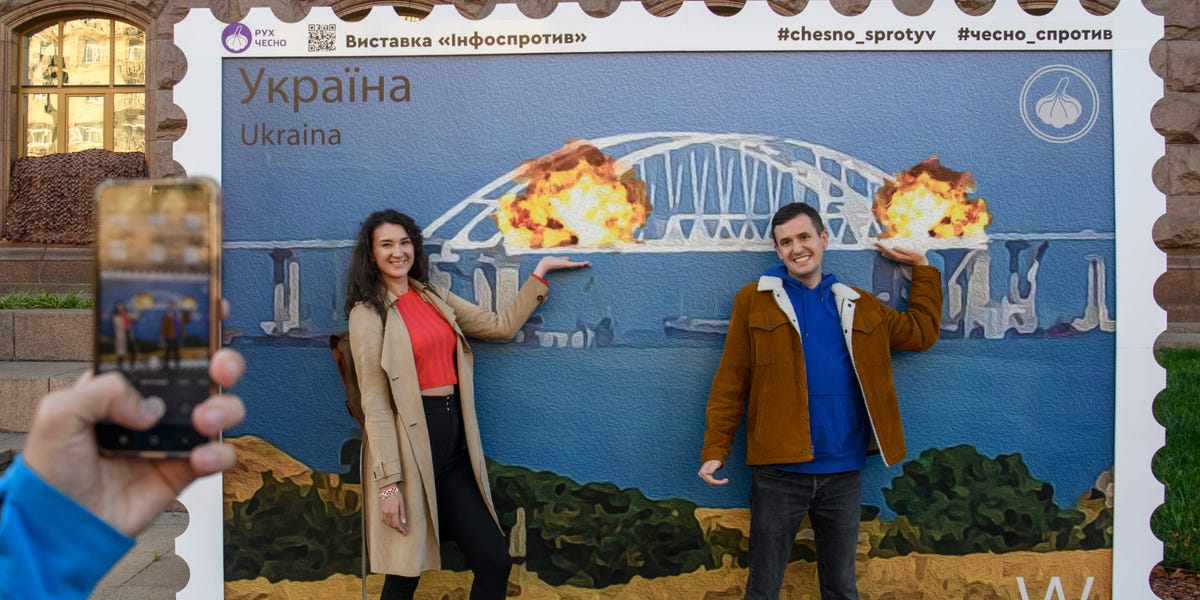 Ukrainians are celebrating and posing next to a giant postage stamp depicting the Crimea bridge explosion on Saturday that severely damaged the sole road route from Russia to Crimea.

An explosion damaged the 12-mile Kerch Straight Bridge, which has been an essential supply route for Russian forces invading southern Ukraine, according to Reuters. Russian officials said a fuel tank explosion at about 6 a.m. on Saturday left a portion of the bridge collapsed, though parts of it have since reopened to traffic.

In Kyiv, Ukrainians celebrated by posing with an oversize postage stamp depicting the bridge explosion.

Though the country has not taken credit for the explosion, some in Ukraine hinted that the timing of the explosion coincided with Russian President Vladimir Putin’s 70th birthday. The bridge was a proud symbol of his illegal annexation of Crimea in 2014, according to The Washington Post.

The leader of Ukraine’s postal service tweeted Saturday that “coming soon,” the agency would issue a new stamp that says, “Crimean Bridge – Done.”

A Twitter account for the Republic of Crimea posted a picture of the bridge appearing to still be on fire, writing: “Good morning from Crimea! #WithoutBridge #Crimea.”

Putin immediately asked that an investigation be launched to investigate the explosion, and his allies, who believe Ukraine to be behind the blast, called for swift retaliation.

On Sunday, Putin said there was “no doubt” that the explosion was an “act of terrorism aimed at destroying critically important civilian infrastructure,” Reuters reported.

“This was devised, carried out and ordered by the Ukrainian special services,” Putin said, per Reuters.