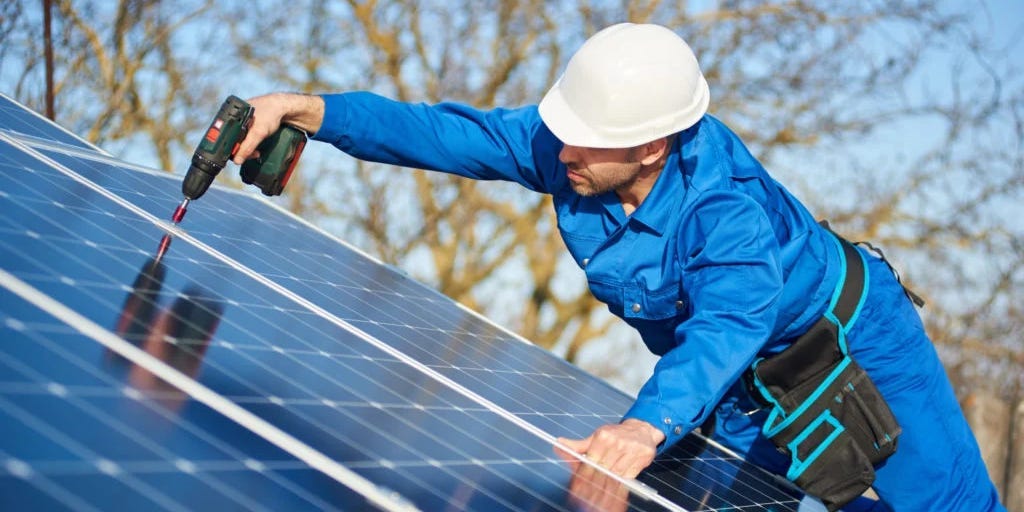 We rented solar panels from Softbank-backed startup Enpal. It was expensive, but worth it amid an energy crisis.


This is an edited, translated version of an article that originally appeared on October 5, 2022.

With the ongoing energy crisis, the demand for solar panels has been soaring.

Solar panels are difficult to test before you take the plunge due to their substantial cost and infrastructure. That’s why, when my parents were considering switching to solar, I asked them to document their experience.

They got a solar-energy system installed at their home through the German green-energy unicorn Enpal, a startup backed by SoftBank Vision Fund and HV Capital, among others.

The startup is aiming to make solar energy a realistic option for everyone via its solar-panel-rental model. Customers pay Enpal a monthly fee which covers the cost of panels, setup, and maintenance until customers have paid off the panels.

Though the startup currently only operates in Germany, Enpal executives plan to expand outside the country’s borders, Mario Kohle, the CEO of Enpal, told TechCrunch in a recent interview.

I’ve been following my parent’s experience with the company and asked them for their initial review of the product and the service.

“We wanted to make ourselves more independent,” my father said. He told me about their decision to get solar panels, adding that climate protection, the prospect of switching to an electric car, and increasing the value of the house also played roles in the decision.

On July 1, my parents got a quote from Enpal

The company’s website asked my parents to set up an account and answer a few basic questions to get started, such as whether you have a gable or a flat roof if you have skylights, the number of occupants, and your consumer behavior, according to my father.

“Congratulations,” the website read, adding that a solar-power system could save them between 22,000 and 27,000 euros in electricity costs, though it failed to specify a time period for these savings.

The next step required my parents to upload pictures of their house and detail exactly what they wanted. They were keen to get panels, a battery-storage system, and a wallbox, which is a charging station for an electric car.

The first call was with a consultant from the sales team who walked my parents through a PowerPoint presentation.

The presentation included AI-generated images of what my parents’ house would look like after Enpal’s solar panels had been installed so that they could see the final product.

The consultant proposed that Enpal could install 20 solar panels, offering a total output of 7.6 kilowatts peak, which is the rate at which solar panels generate energy at peak performance.

They also suggested installing inverters, an energy-storage device from Huawei, and an 11-kilowatt wallbox from Starcharge.

My parents said that despite the standardized processes at the startup, they felt they’d been well-advised and individually catered to.

An Enpal salesperson then sent over the various agreements that my parents asked to see before they signed anything.

“We never felt rushed or ripped off,” my mother said.

They did find one thing that concerned them in a draft of their contract, however.

They said it included a line that read that, as part of the deal, they were also agreeing to switch to Enpal as their energy provider. So, if the solar panels were not producing enough and the storage unit was empty, they would draw electricity from the grid via Enpal’s tariff.

At 51 cents per kilowatt hour in the first year, the tariff would have been around six cents more expensive than that of their local basic supplier. But they said they were able to opt out of this in another meeting.

At the end of July, an Enpal employee then came to inspect their house. The employee inspected the entire house, measuring and counting everything from the roof tiles to the space in the basement where the inverter and storage battery were going to be kept.

Enpal confirmed that they could go ahead with the installations, but they said there would have to be two minor changes — 18 instead of 20 solar panels with 6.84 kilowatts peak and a larger storage unit with a capacity of 10 kilowatt hours.

They signed a contract with Enpal on August 9, with all signatures done digitally and with video identification using IDNow, which my parents said wasn’t all that easy for them.

The installation date was set for September 14, and my parents were told to keep the following day free as well.  Overall, everything went smoothly and surprisingly quickly.

They then had to wait for the electrician to connect the system, which took a week, and also for confirmation from the network operator that everything was set up, which they were told could take between three to twelve weeks, according to Enpal.

This might seem slow, but the advantage of Enpal is that it takes care of the paperwork for you, both with the grid operator and with the regulatory agency.

The consultation process was also completely free, and my parents only began to pay the rental fee once everything was up and running.

My parents now pay around 188 euros a month

After the first 30 months, this will go up to just under 230 euros a month. With the typical Enpal rental period of 20 years, this brings the total cost to just under 54,000 euros.

After 20 years, customers then have the option to buy the system for one euro.

Enpal does offer less expensive options, however, with the cheapest starting at 49 euros per month.

Buying from another provider would also have been significantly cheaper for my parents, and they said they saw comparable systems for between 25,000 to 35,000 euros.

But “we didn’t want to buy from the outset,” my father said, as they would have been solely responsible for the technology after it was installed.

They can now use the provider’s app to check the current output of the system and the battery level of the storage unit at any time — and then plan the use of large appliances such as their dishwasher, washing machine, and dryer.

“It’s no longer a question of when the machine is full, but when the storage unit is full,” my mother said.

So far, the system has overproduced 45 kilowatt hours and fed them into the power grid — but my parents have also had to buy around 12 kilowatt hours.

They said they haven’t been able to save any money yet, because, in addition to the rental fee they’ve been paying to Enpal, they’ve also been paying the normal rate to their electricity provider.

But they said they’re still satisfied with the system. Even on cloudy, rainy days, it gets going and fills the storage unit by up to 40%, they said.