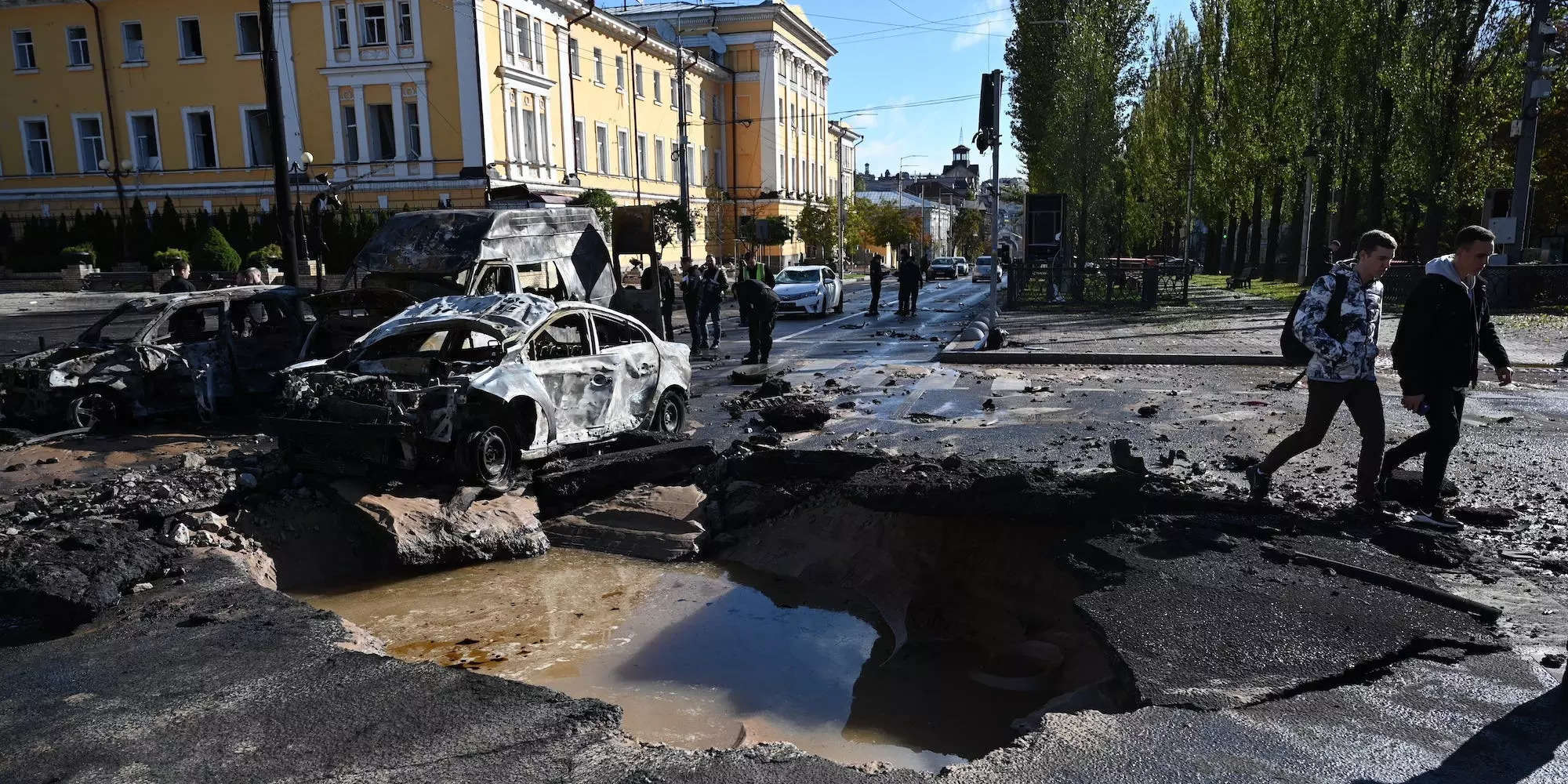 
President Volodymyr Zelenskyy said that Russia used Shahed drones from Iran in Monday’s barrage across Kyiv and several Ukrainian cities and regions, as well as its own missiles.

In a video message, Zelenskyy urged Ukrainians to shelter and said the country was dealing with “terrorists” after strikes rocked the capital.

The wave of strikes also hit the cities of Lviv, Dnipro, Vinnytsia, Zaporizhzhia, and other areas.

The target, Zelenskyy said, was twofold: Ukraine’s energy network, and its civilians. Prime Minister Denis Shmyhal said that 11 critical infrastructure facilities had been damaged, leaving many places without power.

The exact number of people hurt is unclear, but as of Monday morning local time Kyiv police said that 5 were killed and 12 were wounded in Kyiv.

Zelenskyy made the address outside in Kyiv’s government district, not far from where some of the missiles landed.

He said that the number of missiles used was in the “dozens.” He did not give a figure for the drones.

The General Staff of the Armed Forces of Ukraine said that 75 projectiles were launched but only around 30 hit their targets after 41 were shot down. It also said drones were used, without giving specifics.

It is unclear exactly how those weapons were deployed in each area and in what combination.

Images, and some unconfirmed videos from the scenes so far show blasts that appear more consistent with attacks from missiles, which can carry payloads far larger than those of the small Shahed drones.

Ukrainian MP Oleksiy Goncharenko shared a video of a large crater in a children’s playground. The scene was consistent with other footage published from around Kyiv’s main university.

Iran has supplied Russia with several Shahed-series drones, colloquially known as “suicide” or “kamikaze” drones that have a payload of around 5-30 kg.

Light and quick, they are usually deployed in swarms to confuse air defense systems and act like a flying bomb that explodes on impact.

Russia has been deploying them on the battlefield, particularly in areas where Ukraine has an artillery advantage, as Insider reported.

On October 5, the head of Kyiv’s military administration Oleksiy Kuleba said that Russia had also struck infrastructure in the city of Bila Tserkva, around 50 miles south of the capital, using Shahed drones. It was, at that moment, a rare attack beyond the war’s front lines.

Russia first took delivery of Shahed drones, as well as the larger Mojaher-6, from Iran in August, as The Washington Post reported. According to the Post, the first shipment included Shahed-129 and Shahed-191 models.

The UK’s Ministry of Defense first noted the use of the Shahed-136 in Ukraine in mid-September.